The IEEFA predicts a 2% – 4% fall in coal consumption this year, with India being the only major economy likely to increase consumption. China’s predicted decrease in consumption has been attributed to the Chinese government’s promotion of other energy sources. As well as the economic transition from energy-intensive industries such as construction to less energy-intensive industries, primarily in the service sector. Click here to read the full article. 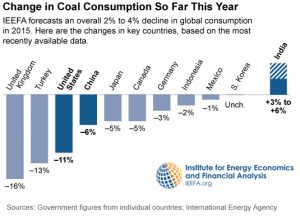 Professor John Matthews of Macquarie University argues that with the right strategy, Australia can still gain from China’s shift away from coal. Click here to read more.

China and Australia’s leaders met on Tuesday at the G20 conference in Turkey. Both spoke of their support for early implementation of the China-Australia Free Trade Agreement, which was signed in mid-June. The two leaders also discussed aligning China’s Belt and Road initiative with Australia’s northern development plan, to encourage Chinese companies to invest in the Northern Territory’s infrastructure. Click here to read the full article.

Cheng Mangjiang, Chief Economist at BOC International has written about the opportunities for cross-border investment in infrastructure that could come from China’s OBOR strategy, click here to read the full article.

The first public interest case under China’s new environmental law has been successful. The Fujian court ruled in favour of environmental groups which filed a lawsuit against a quarry company for pollution near the city of Nanping. The defendant had illegally quarried stone and dumped waste material between 2008 and 2011, despite orders to halt operations from the Ministry of Land and Resources. The defendant has been ordered to pay 1.46 million yuan in fines for ‘loss of environmental benefits’ and legal costs. Click here to read the full article.

Between January to October this year, the Beijing Municipal Environmental Protection Bureau has handled over 2764 cases and has issued a total of 124 million RMB in fines. This is an increase of 25.92% and 92.17% y/y, respectively. Click here to read the full statement.