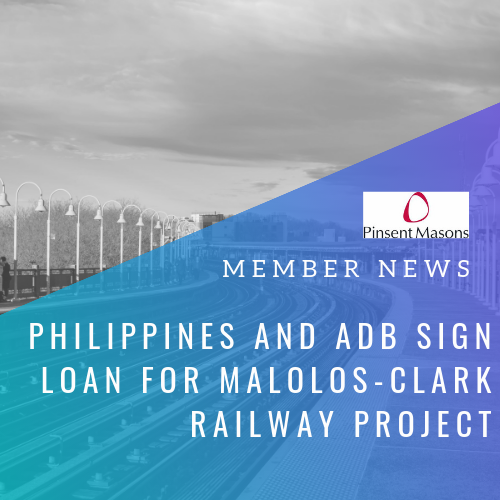 The Asian Development Bank (ADB) and the Philippine government have signed an agreement which will see $1.3 billion provided to help finance the Malolos-Clark railway project. The ADB is co-financier of the project and has agreed to provide a total $2.75bn loan facility to support construction.

According to the ADB statement, the project will support the construction of two sections, totalling 53.1km, of the North-South Commuter Railway (NSCR), a 163km suburban railway network connecting the regional centre of Clark in Central Luzon with Metro Manila and Calamba, Laguna.

The project will see advanced technology used to build an elevated railway line to ease traffic pressure in and around the National Capital Region (NCR). Trains will be able to travel at speeds of up to 160km per hour once the railway is completed. The ADB said the project will also improve air quality, reduce the costs on transport and logistics and bolter economic growth. The project is aimed at encouraging people to live outside of the Philippine capital Manila by connecting the city and the Luzon region to developments in the Clark Freeport and Special Economic Zone. This includes the new Clark Green City which plans to accommodate up to 1.2 million people. The new rail link will also support the current expansion of the Clark International Airport, which will be able to handle eight million passengers per annum when its new terminal opens in 2020.

Priya Dalal, infrastructure expert of Pinsent Masons MPillay, the Singapore joint law venture between MPillay and Pinsent Masons, the law firm behind Out-Law, said: “This is off the back of president Duterte’s ambitious ‘Build Build Build’ programme implemented on 18 April 18 2017 to support various infrastructure and energy projects required to meet the country’s burgeoning need for greater connectivity, increased capacity, increasing energy demands, and upgrading of various services and existing infrastructure in coming years.”

The ADB said its assistance to the Philippines is expected to hit a record $2.5bn for 2019, more than double its average annual financing of $1bn in the last three years.

Japan’s international development agency, Japan International Cooperation Agency (JICA), is co-financing the project with additional financing of up to $2bn for the rolling stock and the railway systems.

Recently, it was reported that JICA still has 900 billion yen ($8.32bn) remaining of the 1.3 trillion yen it has pledged to lend to support the development of the Philippine railway system. Japan has become the biggest investor in Southeast Asia’s infrastructure and its projects in Southeast Asia are valued at $367bn. China is not far behind with its projects valued at $255bn.