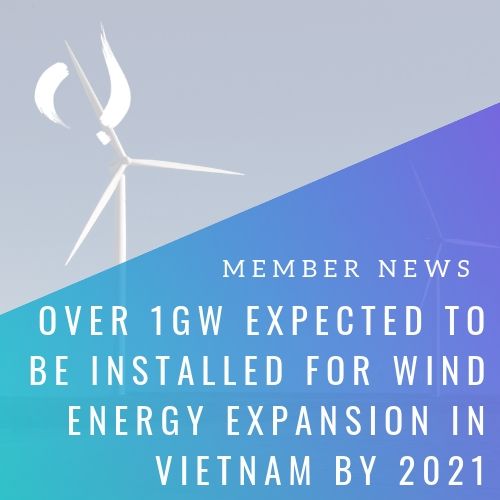 Vietnam is set for an expansion of its wind energy industry, with more than 1GW of capacity expected to be installed by 2021 according to a market intelligence report from the Global wind energy council (GWEC).

The report ‘South-East Asia Market Update: Insights on Vietnam’ suggested that Vietnam has some of the highest potential for onshore and offshore wind and is the only nation in Southeast Asia to have developed offshore wind. It said that 327MW of onshore and offshore wind capacity has been installed in the country so far.Early in 2016 the Vietnam government approved the revised national power development master plan (PDP VII) for the period of 2011-2020 with a target for 2030. According to the news of Vietnam briefing, they set the wind energy targets as total capacity 800MW in 2020, 2,000MW in 2030 and 6,000MW in 2030.

The ministry of industry and trade of Vietnam (MOIT) provided updated guidelines in November and January on developing onshore and offshore wind power projects in Vietnam.

Liming Qiao, Asia director of GWEC, said in the Vietnam wind power 2019 meeting in Hanoi: “With a favourable feed-in-tariff and ambitious renewable energy targets up to 2030, it is clear that the government is ready to make the shift to clean energy. However, coal continues to be the dominant source of energy for the Southeast Asia markets, and we must overcome roadblocks like project financing and bankable PPAs to continue expansion within the region.”

According to Reuters, Vietnam needs to invest up to $150 billion by 2030 to meet growing power demands, with coal very likely to be dominant despite government’s efforts to develop green power.

Project finance expert John Yeap of Pinsent Masons, the law firm behind Out-Law, said, “Vietnam has tremendous wind resources given its long coastline.  We are already seeing significant activity in both on and near shore wind projects.  However time will tell if Vietnam is able to fully commercialise its wind potential given the current issues for international debt and equity providers who may find the approvals process and PPA terms challenging. ”