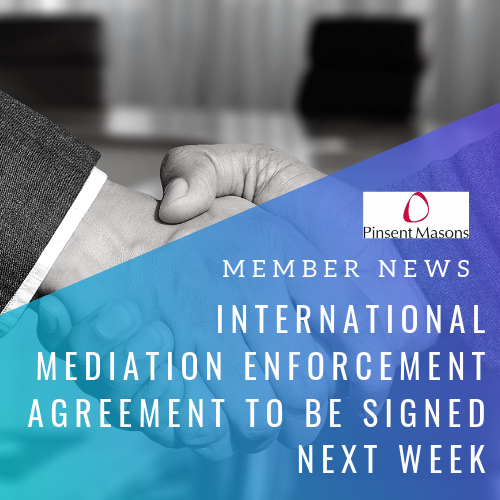 The US, China and other countries will next week sign a new international agreement in Singapore on cross-border mediation agreements.

The Singapore Convention on Mediation is the final version of the United Nations Convention on International Settlement Agreements Resulting from Mediation, which was adopted by the UN in December. It aims to address the lack of “an efficient and harmonised framework” when dealing with cross-border enforcement of settlement agreements resulting from mediation.

A signing ceremony will take place in Singapore on 7 August following three years of debate by a working group involving 85 countries and 35 organisations. The Singapore Convention was adopted in December 2018 by the UN General Assembly with the intention of creating a framework for settlement agreements which takes account of the different legal, social and economic systems of the member states, whilst recognising the increasing use and benefits of mediation in international commercial transactions.

The Straits Times said that, along with Singapore, the US and China will be among the first countries to sign this Convention in August. Other signatories are likely to be Australia, Brunei, Japan, South Korea, Switzerland, Uganda, and Vanuatu. In total 54 countries will attend this signing ceremony.  Around half of the countries have indicated they will sign the Convention.

No EU countries have been listed as attending the ceremony next week because the EU must determine first if it has to sign the Convention as a whole or if its members can sign it individually.

International Arbitration expert Mark Roe of Pinsent Masons, the law firm behind Out-Law, said: “mediation is great way of resolving disputes which not only saves parties significant time and money when compared with adversarial dispute resolution, but can also prevent disputes leading to the irreversible breakdown of commercial relationships.”
“Courts in jurisdictions such as England and Wales have long recognised the overwhelming advantages of mediation by making it a mandatory first step in most commercial disputes, but there has been a reluctance to use mediation on cross border disputes because of concerns about enforcement,” he said. “A convention that makes mediation agreements easily enforceable is an important step in the development of mediation globally.”

The Singaporean minister for law and minister for home affairs Kasiviswanathan Shanmugam SC said: “The strong turnout at the upcoming signing ceremony on 7 August is a powerful statement of support for a rule-based dispute resolution framework that will help facilitate the free flow of trade and investments.”

The Ministry of law of Singapore said that the Singapore Convention needs at least three signatories to sign and ratify it in order for the Convention to come into force. Thus it will very likely come into force some time within the northern hemisphere’s spring of 2020.

The major goals of the Convention are to help with international trade and encourage people to use mediation when dealing with resolution of cross-border commercial disputes. It will offer easier and more efficient enforcement of settlements achieved through mediations conducted in foreign jurisdictions, like the New York Convention does for arbitral awards.

Arbitration expert Nicholas Brown of Pinsent Masons MPillay, the Singapore joint law venture between MPillay and Pinsent Masons, the law firm behind Out-Law, said, “The Singapore Convention shows good prospects of success. It will be interesting to see what practices in time emerge around proving that the settlement agreement resulted from mediation, as defined in strictly consensual terms in Article 2, for the purposes its enforcement in a Convention Party’s court system; and how, in these increasingly protectionist times, the notoriously malleable concept of ‘public policy’ will be variously interpreted by the courts notwithstanding the presumptively consensual nature of the settlement.”

The Convention adopts a similar approach to enforcement of mediated settlement agreements as the New York Convention does in relation to arbitral awards, defining mediation in broad terms, creating a presumption in favour of enforceability and setting out limited grounds on which enforcement may be validly declined.

The Convention also takes a light-touch approach to the requirements which would need to be fulfilled by a party seeking to enforce a settlement agreement. All that needs to be required is the signed settlement agreement, as well as some evidence that the settlement agreement actually resulted from a mediation, which can take the form of the mediator’s signature on the settlement, a document signed by the mediator or and attestation from the institution which administered the mediation, confirming that the mediation took place, or any other evidence that might be acceptable to the court where the enforcement action is brought.
Whilst limited preconditions in this respect are welcome, it raises some practical issues to ensure compliance with the Convention’s requirements. According to Roe “the convention makes it important that Mediator’s sign Settlement Agreements and confirm that the Mediation took place.  While this should not be too big an issue it does require review, and probably, amendment to most Mediation Rules.”

The grounds for refusing enforcement are similar to those which can be invoked under the New York Convention to oppose enforcement of arbitral awards. Incapacity of a party, invalidity of the settlement agreement, and the agreement not being binding or final are all grounds for refusal which will be recognised by those familiar with the New York Convention. However, whilst establishing the binding and final nature of an arbitral award is usually determined by the wording of the award and the applicable procedural law of where the arbitration was seated, ascertaining whether a settlement agreement is binding and final could lead to significant difficulties, it would be wise to include appropriate wording to that effect and avoid conditional settlement terms.

Similarly, refusals of enforcement based on the clarity of the obligations to be performed under the settlement, or questions as to whether the mediator breached applicable standards in circumstances where there may be no discernible standards which apply to mediators in certain jurisdictions, could lead to lengthy challenges which exacerbate delays in enforcement.  This may militate in favour or nominating a seat for Mediation in places that are supportive of the process such as New York, Singapore or London.

In order to ensure that enforcement of a mediated settlement agreement cannot be subsequently opposed, parties will need to take these factors into account when entering into agreements to mediate disputes. In particular, the ability to refuse enforcement where the subject matter of the dispute cannot be settled by mediation in the jurisdiction where enforcement is sought, or enforcement is otherwise against public policy, will require a particularly acute level of foresight, especially in cases where the location where performance of the obligations under the settlement agreement is different from where the obligations of the underlying contract were to be performed.

According to Roe, “parties who rely upon the Convention to enforce Mediation settlements could end up with a nasty surprise if they don’t take account of the exclusions and reservations set out in the Convention when entering into mediation agreements. I expect that law firms, as well as the various mediation institutions and independent mediators, will be revising their pro forma mediation agreements before the Convention enters into force to take account of these issues in order to ensure that settlement agreements resulting from future mediations will be enforceable as far as possible.”

“Despite these teething issues, however, I think that the Singapore Convention presents some much-needed impetus to commercial parties to engage meaningfully in mediation. Entering into a settlement agreement following a successful mediation in the knowledge that the settlement can be enforced in much the same way as a court order or arbitral award, without the need to worry about complying with the vagaries of foreign courts, should provide decision-makers with some added certainty that their counterparties are going to honour their commitments,” he said.

The Singapore Convention will enter into force six months after the third signatory state deposits its instrument of ratification with the UN Secretary General, and will apply to settlement agreements concluded after the date of entry into force.

In November 2017 Singapore enacted the Mediation Act, which allows users to enforce their settlement agreements arising from mediation at the Singapore International Mediation Centre as consent orders.