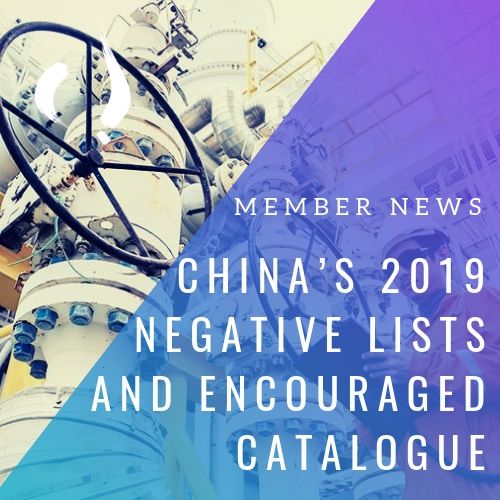 The 2019 editions of China’s National and FTZ Negative Lists and FI Encouraged Catalogue are important supplements to the upcoming Foreign Investment Law.

On June 30, 2019, the National Development and Reform Commission (NDRC) and the Ministry of Commerce (MOF) jointly issued two “negative lists” and one “encouraged catalogue”, all three of which will take effect on July 30, 2019.

These two negative lists enumerate the industries where foreign investment will either be prohibited or restricted.

The respective lists will be applicable in different areas – the FTZ list is for pilot free trade zones and the national list is for the rest of the country. 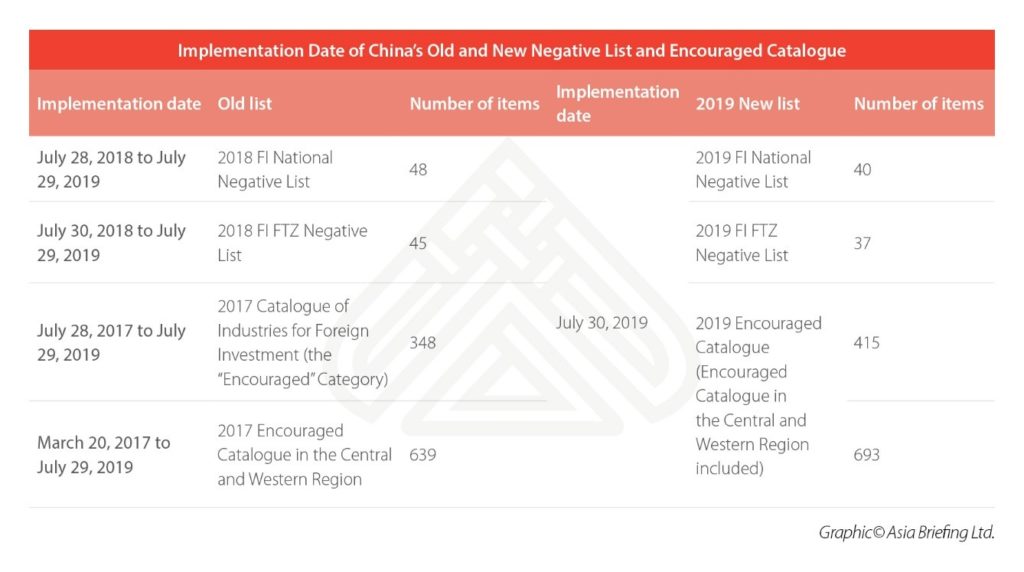 The newly released lists and catalogue will assist foreign investors when evaluating investments or market entry into China as they can assess whether their business will be permitted and can enjoy preferential policies from the government.

Overall, the 2019 FI negative lists have been shortened, while the encouraged catalogue has been extended.

Simply put, there are fewer sectors where foreign investment will be restricted and more sectors where it will be encouraged. This bodes well for further market openings in China.

Major changes to the negative lists

New opening-up measures will allow majority foreign ownership or wholly owned foreign enterprises in sub-sectors, such as the exploration and development of oil and natural gas, production and supply of heat and gas, value-added telecommunications, shipping business, manufacturing of Xuan paper and ink ingot, exploitation of wildlife resources, and operation of cinemas, as the table shown below. 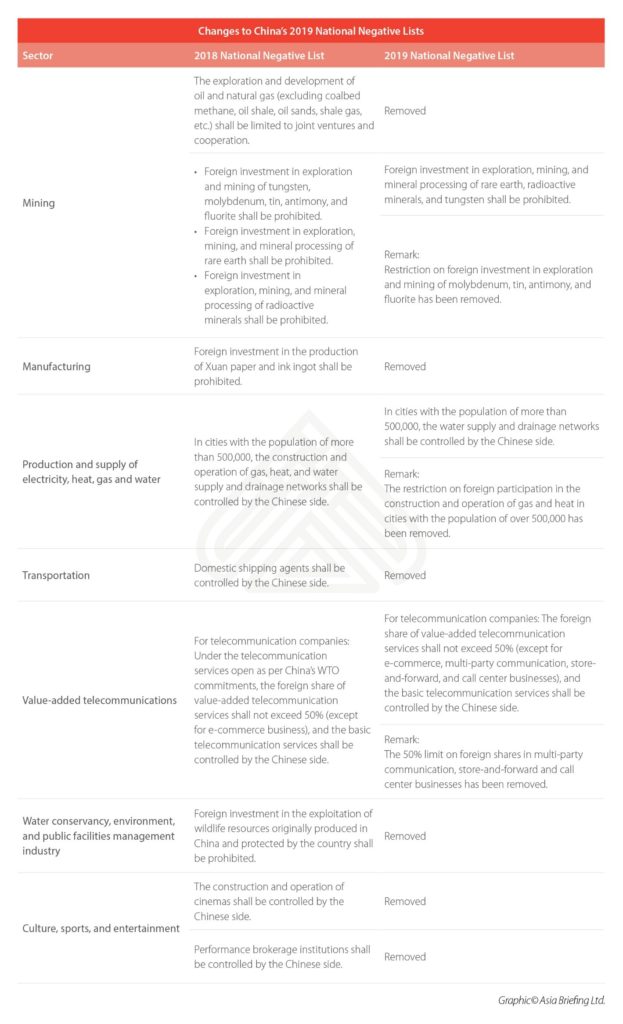 The FTZ negative list further opens up another two industries – the fishing industry (by lifting the ban on investment in fishing products within China’s territory) and the printing industry (by removing restrictions on ownership of press publications).

For industries not included in the negative list, foreign and domestic investors shall enjoy equal access under the law, save for record-filing requirements.

No region or department may impose separate restrictions on foreign investment in areas not on the negative list.

This shows that China is opening more industries to foreign investment.

Nationwide, the number of encouraged industries has increased from 348 to 415, with 67 items added and 45 items revised, compared with 2017. 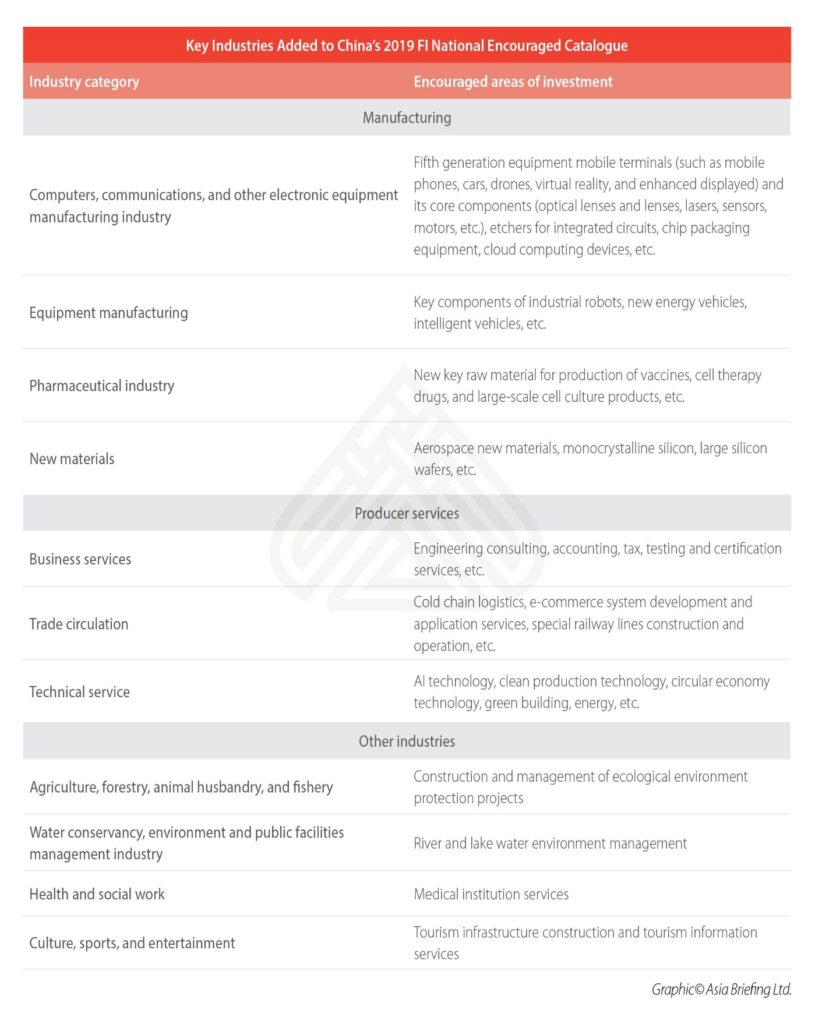 Region-wise, in the sub-catalogue of China’s 22 provinces, encouraged items have been increased from 639 to 693, with 54 items added and 165 items revised, compared with 2017.

Foreign investors are more encouraged to transfer their investment to the central and western regions, such as Anhui, Hunan, Sichuan, Henan, Yunnan provinces, and Inner Mongolia.

Foreign-funded projects that fall under the encouraged catalogue will be eligible for preferential treatment, such as tax incentives, streamlined approval procedures, and discounted land prices.

How to use the negative lists and encouraged catalogue

Moreover, foreign investors should also be aware that for some industries on the negative lists or even the encouraged catalogue, there may still be a set of examination and approval conditions and procedures that companies need to secure from relevant authorities. Seeking local expertise is advised.

This article was first published by China Briefing, which is produced by Dezan Shira & Associates. The firm assists foreign investors throughout Asia from offices across the world, including in in China, Hong Kong, Vietnam, Singapore, India, and Russia. Readers may write info@dezshira.com for more support.