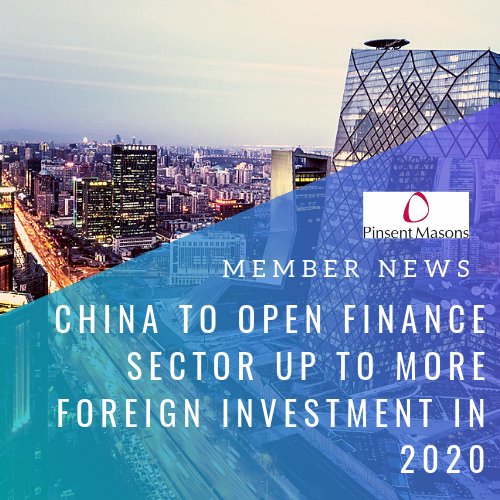 China will remove some restrictions on foreign investment in the financial sector in 2020, a year earlier than expected, according to a statement from the China’s Financial Stability and Development Commission.

The statement followed the sixth meeting of the financial stability and development committee chaired by China’s vice premier Liu He. Eleven measures are included in the statement on encouraging financial activities by foreign-funded and oversea institutions.

Foreign-invested credit rating agencies will be allowed to assess more bond and debt types and foreign investors will be allowed and encouraged to establish asset and wealth management firms; pension management companies, and wholly-owned currency brokerage.

Some of the foreign investment entry barriers in the insurance industry will be removed, such as the 25% shareholding cap for foreign participation in insurance asset management firms and the requirement for 30-year operation terms for foreign insurance companies.

China’s Financial Stability and Development Commission said it was operating on the principle of “faster rather than slower and sooner rather than later” when it comes to open up for foreign institutions.

Reuters said that this opening up of China’s financial sector “is a key part of Beijing’s efforts to resolve a trade war with the United States”.

The South China Morning Post said that the measures were likely to have been spurred on by an urgent need for “growth following weak economic figures out on July 15”, which was China’s “weakest performance in at least 27 years at 6.7%” in the second quarter this year.