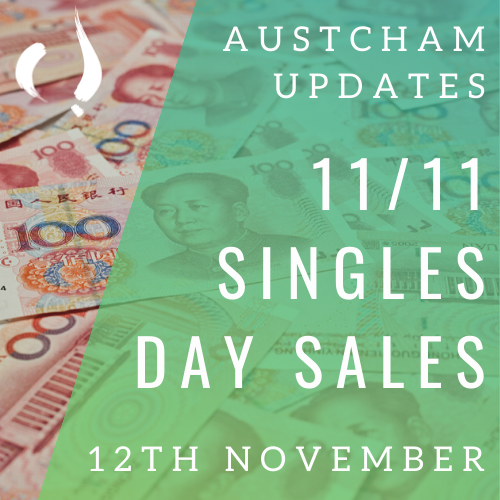 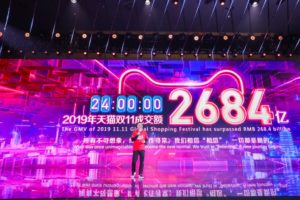 The world’s largest shopping event has amassed total sales of nearly USD $70 billion in gross merchandise value (GMV) across China’s two largest e-commerce platforms, Alibaba and JD.com. The 24-hour event is known as the Double 11 shopping festival as it falls on the 11th of November, China’s annual ‘Singles Day’.

The significance of the day originated in the 90s when a group of students from Nanjing University decided to celebrate their pride in being single, rather than pining for a significant other. They chose 11/11 as it looks like four singles standing together.

The Origin of the Sales

The commercial holiday was designed to pervade “treat your self” culture, where single people across the country would splurge on goods they wouldn’t otherwise buy or treat themselves to nice dinners. It has now expanded into a massive shopping event across singles and couples alike.

In 2009, sales giant Alibaba first begun offering huge discounts across its e-commerce sites, such as Tmall. The sales frenzy has now extended through to competitors such as JD.com and Pinduoduo, and across platforms in South East Asia.

Alibaba’s gross merchandise value (GMV) surpassed sales records yet again, rising to USD $38.4 billion by the end of the day. Within the first hour alone, gross merchandise value of Alibaba hit USD $12.01 billion, and by the next half hour, the GMV had already exceeded 2016’s total. Predictions for this year’s sales were not particularly optimistic due to slowdowns in the Chinese economy. However, by the end of the 24-hour event, the growth rate was just under 26% year-on-year, which is only marginally slower than last year’s 27%.

Additionally, there were fears that American brands would be overlooked by Chinese consumers amid the US-China trade war. However, the US was the second country by GMV for countries selling to China. 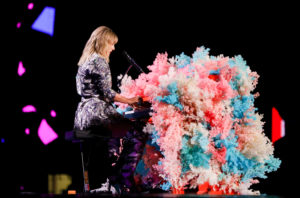 Livestreaming has had an integral role on e-commerce sites, with an increasing emphasis to advance the sale of goods with Key Opinion Leaders speaking to followers and highlighting products. This technique has expanded globally, with Kim Kardashian livestreaming her announcement that her fragrance brand KKW would be available for sale on Tmall.

Leading up to the sales, on Sunday night, Alibaba also held a Countdown Gala featuring Taylor Swift in Shanghai.

The Current Space for Waste

Whilst the sales for Chinese e-commerce platforms have experienced 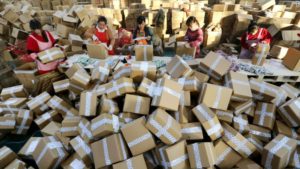 remarkable growth since the creation of the 11/11 shopping festival, the accumulation of waste has seen better days.

The waste from e-commerce and express delivery sectors stands to more than quadruple by 2025 unless action is taken to rein it in. Whilst recycling has become an increasingly profitable business, due to limited space in landfills and broad environmental concerns, it has struggled to work in the e-commerce space. Only 5% of plastic packaging from e-commerce purchases is recycled. 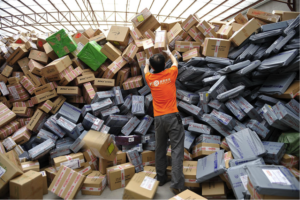 China has made slight changes to improve recycling habits, with plans to build 100 “comprehensive resource utilisation bases” and creating pilot “zero-waste” cities. The mandatory trash sorting rules in major hubs, such as Shanghai, have also made integral improvements to the system.

With the world’s largest e-commerce market, comprising 42% of global transactions, China is well placed to innovate solutions for waste in the digital economy.

The Future of Consumption 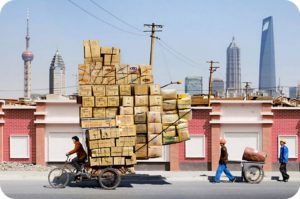 China’s growth in the e-commerce field is undeniable, and this has resulted in incredible convenience to a cornucopia of goods. In light of this, consumers and businesses should remain mindful of the almost unsolvable waste epidemic, and take actionable measures where possible to a sustainable path of consumption.

Wed, 13th Nov: Added the total GMV from Alibaba and JD.com combined (nearly USD $70 billion), with a clarification that the sales records broken were from Alibaba only. New statistics have shown that the GMV has hit USD $38.4 billion; previously, this figure was USD $38.3 billion.