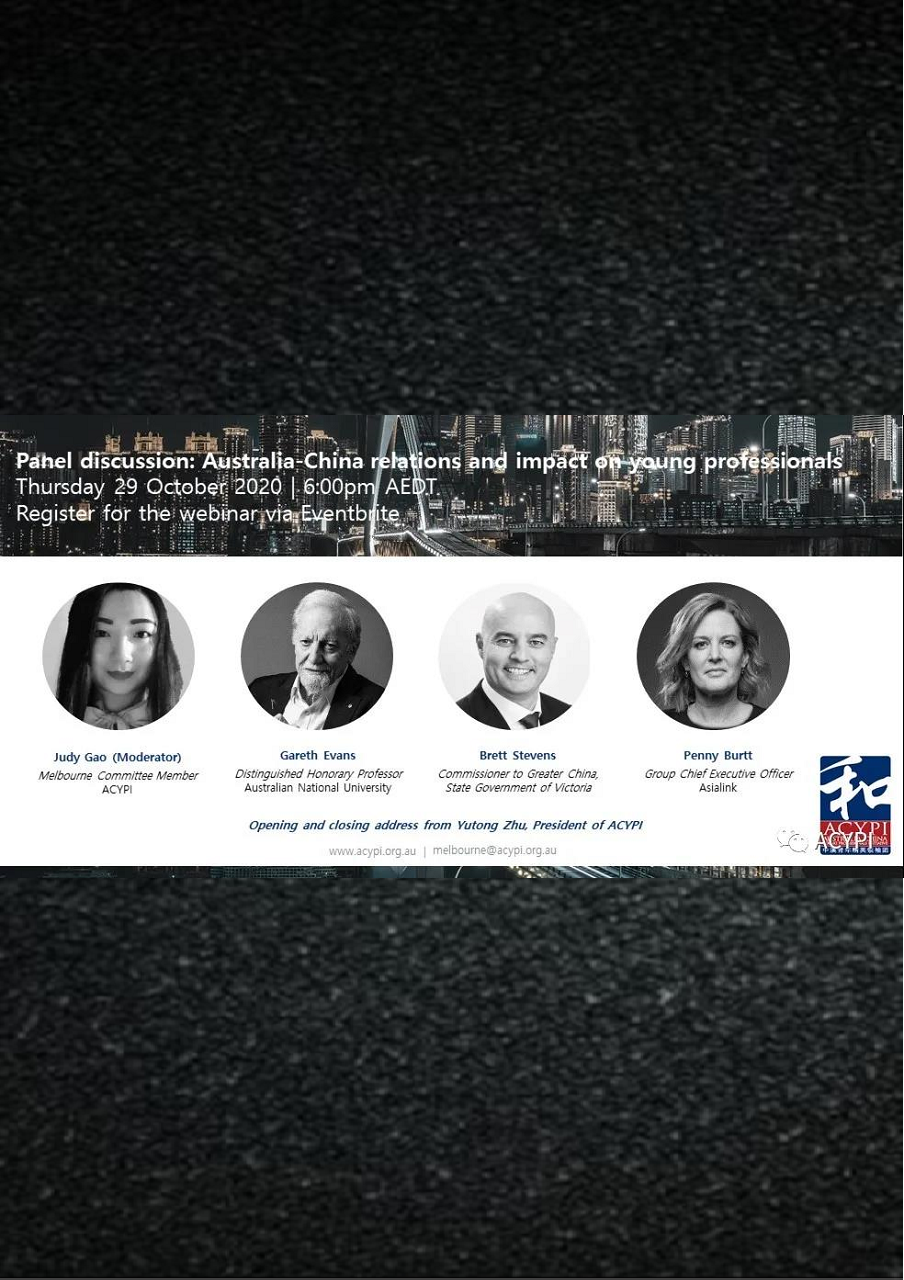 The Australia-China relationship has been fraught with tension in recent years. What future lies ahead the two countries and what can young people do in this time of uncertainty? Please join Australia China Young Professional Initative and supported by AustCham China, on Thursday 29 October in conversation with our three distinguished guests, Gareth Evans, Brett Stevens, and Penny Burtt to discuss the current affairs impacting Australia-China relations.

Gareth Evans is Distinguished Honorary Professor at the ANU, where he was Chancellor from 2010 to 2019. He was a member of the Australian Parliament for twenty-one years, and a Cabinet Minister for thirteen, including as Foreign Minister from 1988-96. After leaving politics he was President of the Brussels-based International Crisis Group from 2000-09. He co-chaired the International Commission on Intervention and State Sovereignty (2000-2001).

Brett Stevens is the Victorian Government’s Commissioner to China and is responsible for advancing Victoria’s trade and investment interest across the region. He was previously appointed as the Premier of Victoria’s representative in Southeast Asia in 2013 and has over 25 years of international trade experience in the region, across both the public and private sector.

Penny Burtt has more than 25 years of experience in diplomacy, trade and investment, international business, and consulting at the most senior levels across four continents. She is currently the Group CEO of Asialink, Australia’s leading centre for Asia engagement. In a career spanning the business, government, and nonprofit sectors, she has held senior leadership positions in the Asia-Pacific with global multinationals Visa Inc, the digital payments company, and consulting firm McKinsey & Company.  A former senior diplomat, Penny represented Australia in Asia and the United Nations and as an Asia advisor to the Minister for Foreign Affairs.

Platform: Zoom (a link will be sent to each of the registrants closer to the date)

Through our initiatives, we aim to promote people-to-people exchange and cultivate cross-cultural literacy among young professionals in Australia and China to help their decision-making as future leaders across sectors.