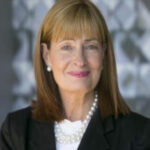 Sue took on this role in 2017 after leading the firm in Australia for four years as Chief Executive Partner, Australia. Sue works closely with the Global Chairman and the firm’s International Management Committee to lead the firm’s international growth strategy. Sue is based in Hong Kong and spends significant time in China and Australia.

She became a Partner of legacy firm Mallesons Stephen Jaques in 1996 and has held a number of board, management and leadership positions in the firm over the past two decades.

Amongst her many professional achievements, Sue has received a number of accolades and acknowledgements for her impact and influence on the legal profession in the Asia Pacific. These include:

Sue is a member of Chief Executive Women.

Sue was the first woman in Australia to lead a top tier law firm in that role and is the first Australian female to lead a global law firm.